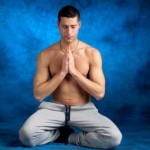 This is the third article in a 5-part series of debunking some common (and universal) myths about yoga.

Ladies, this one will focus on something you may have heard while trying to persuade your husband to join your yoga class. Or gents — you may have been met with this response when accidentally mentioning to your buddies that you tried it once.

Yes my friends, we’re exploring the idea that: “yoga is for girls!”

It is true that in the West, many yoga classes are packed with women.

It has a reputation as being quite a feminine practice, and the masculinity fades into the background. Maybe because yoga helps to tone lean muscles, not build them up body-builder style?

But I have heard plenty of other excuses reasons why more men don’t practice yoga:

Not enough of a workout (see Dispelling Yoga Myths: Part 1 and then come back to me).

You get the idea…

Though I know of many men who practice and even teach yoga, in the West it is generally a female-dominated phenomenon. Over time, perhaps this will change, but in order for this to happen men need to feel comfortable enough.

For example, speaking to one gentleman recently he told me that he used to attend a class in which the majority was made up of women, and there were only two men, including himself. Eventually, the other man stopped going to class so he felt as though he should stop going, too. Not only did he feel uncomfortable as the only male in the class, he also felt as though he would be making the women uncomfortable and assumed they would prefer a women-only class.

Of course it was his choice to drop out of the class, but ultimately he didn’t want to — ultimately he wanted to continue with yoga but was worried by what others thought.

Yes it sounds quite noble of him, but really there shouldn’t be a stigma around gender in classes such as this.

The focus of yoga

It may be an unrealistic view, but a yoga class should be about you.

I was once told if you have a good yoga teacher you shouldn’t remember them because they will have brought the focus to you. You should remember how you felt in yourself after that class, not on how great/terrible/chatty the teacher was.

The same concept can be applied to the earlier example: the gentleman’s focus should be on himself and his personal practice during the yoga class, not on how he was the only one of his gender.

I think slowly this stigma is fading away.

The good news is that more and more men are practicing and teaching yoga, but evidently it is still slightly apparent in some cases.

This is pretty ironic because yoga was brought to the West by a lineage of Indian male teachers.

Women were never part of the yoga tradition. In fact, they were encouraged away from yoga, and right up until the 20th century women had to leave their families, lives, and societies to become a yoga practitioner. They could not have the “best of both worlds” which so many modern women rely on today: doing what they love, being where they love, and being with whom they love.

It is interesting to see how the pattern has shifted from yoga being originally practiced and taught solely by men to a majority of female practitioners and teachers worldwide.

Yoga and the fitness industry

The new movie “Yoga Woman” narrated by Annette Bening brings these ideas to life: aiming to explore the way in which yoga has hit the West, with an emphasis on women and how it has empowered the female species to new heights.

Now, far be it from me to turn this into a review about that film as I have only seen the trailer, but just a few words about what it seems to be.

The movie seems to be saying that women NEED yoga.

And to quote a part of the trailer “it’s our obligation to teach other women, to teach young girls, to teach our mothers, so that the ripple effects of the power of yoga reverberate throughout the world.”

Of course it is a revolutionary and empowering thing for women throughout the world to have almost claimed yoga as their own, and created it into something women can share and the power that has is undoubtedly supreme. However, as part of this statement the trailer claims “Women have turned yoga into a multi-billion dollar industry.”

I would argue that this is nothing to brag about.

Yes, as a teacher I believe that having worked hard for my skills and training and that charging money for my classes is a necessary and fair thing — but transforming yoga into a multi-billion dollar industry has thus created something that it is not.

It has created just that, an industry.

Yoga is traditionally a…

Should we be proud that as women we have created something worth billions of dollars? Not sure that’s the best case to make.

I completely agree with the general point of the trailer that “there’s so much cultural brainwashing about what it means to be a woman… yoga helps us to cut through our drama,” so women are in an odd cultural standpoint where they need yoga, and it can help to bring them not only to themselves, but together.

However, the underlying message of this trailer disturbs me slightly.

Women have taken yoga and made it into something, something amazing for women. But where does that leave men?

Yes, yoga was started by men and women overtook it, but those men were in the East. What about the Western men, who are so taken by such a concept, they want to be involved, they want to experience what we experience?

This “multi-billion dollar industry” predominantly run by women can be a pretty intimidating place to be.

From a yoga perspective, it’s a woman’s world.

It is no wonder that the gentleman mentioned earlier felt uncomfortable in a class full of women, not only within himself, but the message projected by this film is one of female unity, which is no bad thing, but for one sole man in a yoga class it seems slightly unfair.

So ultimately, what I’m trying to say is that yoga is, and should be, for everyone and anyone.

It doesn’t have more benefits on you if you tend to be full of estrogen, nor will you lack in reaping anything if your testosterone is through the roof.  A major component of the practice is about dissolving the ego and finding your true self on and off the mat, regardless of your age, class, race or gender.

Of course women have created a wonderful community through yoga as something to be shared, but I suggest we focus less on the gender of people participating, and more on the amazing effects yoga can have.