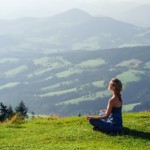 Anyone who is new to yoga will adopt one of two habits in their first class.

They will either hide at the back and snigger when they can’t reach their heels to the floor in downward dog, or have a giggle to themselves when they fall over — or they will suddenly become very intense and serious, no smile in sight, they will be completely as one with their mat.

Or at least pretend to be.

Yoga can be taken very seriously, and as a spiritual practice of course we have to respect the need to practice and the importance of this. However, as your practice continues you will realize that there is absolutely no reason to remain straight-faced in yoga.

Taking your practice too seriously can also be a major hindrance on your health, mentally physically and spiritually.

Smiling is good for you, and if you’re not smiling during yoga, you may start to resent your practice, your face will tell your brain and body what to think, and they won’t like it much.

Yoga has a reputation of people who are very earnest, serious and intense.

Perhaps this is because it is something which requires a lot of focus, stillness and concentration. This doesn’t mean it can’t be enjoyed in a jovial way: laugh, joke, smile, sing if you like! (maybe not too loudly though).

The reputation can sometimes be one of ‘spiritual-snobbery’, and there are varying degrees of this.

There can also be a lot of judgement in the yogic world, which to me sounds rather paradoxical. There are those who think it snobby to use words of the Sanskrit language in class, or to perhaps use certain terminology and ways of describing the practice, or even to bring the class to a full-on meditation (not just an end-of-class savasana).

These reputations of “hard-core yogis” and the judgement upon them can be off-putting for those wanting to practice, or even those wanting to train as a teacher, but they shouldn’t be. I personally use Sanskrit words in my classes quite often, from experience I believe that people like having that slight connection to an estranged culture and philosophy which they may not otherwise be aware of.

I also bring aspects of meditation and traditional chanting to my classes.

However, the aim is not to make everyone in the room become straight-laced, straight-faced and a boring waste of space.

I’m not a drill sergeant.

The aim is to bring something to the class that is traditional, straight from the source, something people in this country may not know much about. And if we feel like cracking a few jokes or busting out your best toothy-grin along the way, go for it!

Yoga and Your Emotions

Yoga can bring out emotions in us.

Particularly if you are either:

During my teacher training, we were practicing yoga at least 4 hours per day and extra meditation and chanting classes on top of that. Needless to say, emotions were unveiled in all shapes and forms. Toward the end of the training, there would scarcely be a class during which someone wouldn’t either break down in tears or hysterical laughter and not really know the reason why.

This happens because our body and mind are doing things they are not used to.

Opening your heart (i.e. in backbends) can help stuck emotions flow out, finding your balance (in balance poses) can unveil any instability within us, strength poses can allow us to find and conquer our weaknesses, and the list goes on.

Plenty of emotions come into play during yoga, and you may sometimes find yourself feeling a little weepy after practice, or you might feel a kind of bliss, everyone is different. But just know that all these emotions are good, it might feel a little strange, but yoga is partly about an emotional journey, and sometimes the laughter, tears or just a great big smile need to come out.

And on that note, if you are trying a strength pose, or a balance or inversion and you fall, you must laugh.

I know that you won’t at first, none of us will.

When I was first attempting Bakasana (crow pose), every time I fell I grew increasingly frustrated with myself, there’s no way I was going to laugh, I was ready to find a poor innocent crow and kick it right into next Tuesday. But that wouldn’t have been very yogic of me, so I refrained.

After a while, we learn to laugh.

Not taking your practice too seriously is what it is all about. For many reasons, but mainly for your own sanity. If everyone got as frustrated as I did every time Bakasana was attempted in the world, well… the crow population may have died out by now.

During the times of frustration we can create an awareness of how we overreact in the moment.

Our yoga practice, as always, directly relates to life.

It can help us to realize the triviality of the thing we are becoming so worked up about. In each situation in life, of course we have a gut reaction, but we can train ourselves (through practices such as yoga) to change that reaction into the necessary one — a reaction of laughing things off, of realizing how much or how little magnitude something holds.

How we react to something in life is often what dictates the outcome.

Treating your practice with love and enjoyment will help to manifest just that.

Yoga is not about putting a whole bunch of ‘shoulds’ on yourself.

In fact, this will only cause stress, anxiety and you will always be reaching for something else. Whilst challenges and striving for success are great, yoga is about both being within and enjoying the present moment.

It is about finding a practice that is balanced with enjoyment, ahimsa, contentment and joy.

So next time you’re feeling angry at yourself for falling out of a pose, or not getting your heels close enough to the grounds, try these steps to the perfect yoga pose: slowly and gentle turn the corners of your mouth up towards the ceiling.