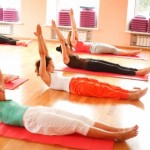 In daily life, we can see that our emotions are strongly connected to our bodily functions.

When you become overly stressed, over-worked, worried or nervous over a period of time, what happens? You become ill.

The mental and physical are sometimes seemingly inseparable, it is difficult to discern where one begins and the other ends, or in fact, which is the cause and which the effect.

If we suffer with anxiety or nerves, we suffer noticeable and very common physical symptoms. We might sweat, we might experience shortness of breath, “butterflies” in the stomach or quickening of the heart-rate.

These symptoms occur because of a signal sent from the brain, the mind is dictating these symptoms.

The link between emotions and our body

Thus, our physicality is dictated by our emotions, not vice-versa, as can commonly be believed.

Let us use the example of someone who has a slightly kyphotic posture, commonly known as a “hunch” or “hunch-back.” Yes this can be caused by kyphosis, which is a disorder of the spine curving forwards, but it can also be a very mild physical symptom which doesn’t affect the spine, but only the shoulders and neck.

This is very common because it is apparent in those who hold onto negative energy in their upper back/shoulders/neck.

This tension is very apparent when you notice it.

Next time you see someone who has such a posture, take a closer look. Many people think it is just the way they are built, but it can actually be an emotional issue. These emotions (blocked negative energy held in this area of the body) have caused this physicality, not vice-versa. There are ways to reverse such a posture, and also ways to reverse such an emotional blockage, and that’s where yoga steps in.

Yoga poses and your emotions

The response to emotional problems in yoga lie within asana (poses).

Each yoga pose has a counter pose to offer the opposite reaction, thus each mental or emotional turmoil has an asana practice which can be prescribed.

Sticking with our earlier example, if someone is holding onto tension or negative energy within their shoulders and are thus slightly hunched forward, they need to be practicing heart opening asanas. Heart openers are exactly as they sound, poses that literally, physically open your heart. Most heart openers are back-bends, as by bending backwards and extending your spine, your heart is opened.

This seems like a philosophy but is actually a very realistic and scientific theory.

The subject of psycho-somatic illnesses is widely debated but to me it seems that the mind and body are so inextricably linked, there is almost no reason to doubt the existence of such ailments. We know that we can build up our thoughts to become something they are not. We can over-analyze an off-hand comment someone makes, we can build up a small situation into a crazy reaction creating a mountain out of a molehill because our thoughts are so powerful.

In the same way, this power can have vast effects on us physically as well as emotionally.

Yoga has the potential to reverse this into a positive.

Instead of allowing our minds to rule over our bodies, yoga can help us to use our bodies in order to sway our minds in a positive manner. We can use certain poses to affect our emotions, thus affecting our physicality.

For example, we can use grounding poses in order to ground and still our mind whilst grounding and stilling our body. An example of a grounding pose is paschimottonasana (seated forward fold). Forward folds are great for grounding because we are bringing the awareness inwards by bringing our physicality in towards ourselves.

If seated, they also create a long line between the body and the mat, the length in the side of the body creates deep breathing and folding inwards calms the nervous system, both great grounding techniques.

I once visited an ayurvedic doctor and was prescribed more forward folds in my practice as a form of grounding. This was to counteract a heart that was ‘too open.’

Yes, I know what you’re thinking, the same thing I thought when I was diagnosed with such a thing. I was pretty pleased with myself, an overly open heart? How can that be a bad thing?

But actually, having an emotionally open heart means you are susceptible to other people’s emotions, particularly negative ones. Taking on other people’s negative energy can be emotionally quite dangerous, so using grounding postures to neutralize this and maintain a balance can be beneficial, heart openers however would not be a good sequence for these people.

Poses for balance and grounding

Speaking of balance, balancing postures are favorable when experiencing imbalances in a chaotic lifestyle.

If some areas of your life seem to be spiraling out of control and others tend to not be getting off the ground, or if you simply have too much of one thing and not enough of another, balance postures are your friend.

Balance postures also go together great with grounding postures, which are usually needed by the same people.

A good example of such a pose would be Vrksasana (tree pose). Whilst it is a balance pose, encourages concentration, focus, stillness and stability, it also cannot function without the grounding of one side of the body.

Strength poses are useful for those who have emotional weaknesses and/or need some strength at certain points in their life.

Examples of these are arm balances, standing postures, and core-strengthening poses. A great sequence of strength poses are Virabhadrasana I,II and III (the Warrior poses). They use lower-body strength as well as encouraging grounding; Warrior III is also a balance pose.

Inversions reverse the direction of gravity within the body, so the orientation shifts towards the head instead of the feet. Similarly, the emotional side of things shifts too, it allows our perspective to change and our regular patterns and behavior habits alter.

In sirsasana particularly, the blood flow is directed towards the head thus it encourages healthy blood to flow to the brain cells revitalizing them, leading to mental clarity, invigoration and stimulation of the nervous system.

People suffering from loss of sleep and memory problems can benefit from this pose because whilst it soothes and calms you during the pose, the after-effects are mental alertness and lucidity in the thoughts. Sirsasana (headstand) is also associated with phobias, it helps us to conquer a fear of the unknown, it literally turns our world upside down, and promotes a sense of newness. It helps us experiment safely with a certain amount of fear and apprehension — it is a pose which helps us to challenge ourselves within our practice.

The physiological benefits of being upside down for a short amount of time each day are numerous too, but these emotional benefits are amazing.

Whilst revitalizing and invigorating the body, it soothes and calms the mind and spirit.

So, the answer to your emotional and mental troubles really lies in your body.

To put it in a simple allegory, this can work in the same way as a smile. If you smile even when you’re not happy or have no reason to, the physical actions tricks the brain into thinking you’re happy. The physical movements involved in your face when you smile have direct effects on certain brain activities associated with happiness.

The same can happen in yoga.

We physically ground our body and our mind can become grounded too. We open our hearts on a physical level and our hearts, emotions and mind will become open too.

It seems so simple, right?