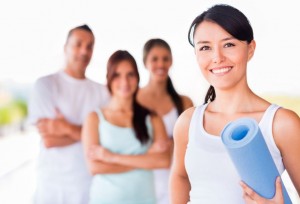 So I meet people all the time who ask me about being a yoga teacher, my classes, my training, practice etc.

When I ask if they have ever tried yoga, in their polite, well-mannered, I-mean-not-to-offend fashion, they often reply “I’m just not a yoga person”, or “it’s just not my cup of tea.”

I appreciate the politeness, but I know what they really think is “Yep, I tried it. I HATED it.”

When I first started yoga I remember my first few classes and these thoughts crossed my mid during class:

I was frustrated with the pose I was in, I couldn’t reach my toes, I couldn’t bend back like the teacher had demonstrated.

I was convinced I was in pain.

Actually, it was just a deep stretch that I wasn’t used to because I was a beginner. If I’d used the breath as much as the teacher was ranting about, it would have made the pose easier, but I thought I knew best.

I didn’t think I was benefiting from any of it.

I thought, if I can’t twist myself into that pretzel-resembling shape like her-in-the-hotpants next to me, what’s the point? Am I even getting anything out of this? Little did I know, yes I was getting something out of it, quite a lot actually.

Yoga poses and your response(s) to them…

There are certain poses which often promote “hate” (it’s a strong word, but it’s banded about so often, that I’m claiming free usage of it for now.)

But these poses also promote a whole lotta love.

For example, Pigeon pose. I can hear your groans of familiarity at the mention of it, but I also hear some lifting of hearts, and that’s because pigeon-pose is a bit of a marmite-pose; you either love it or hate it. Pigeon divides opinion right down the middle. Primarily focused on the hip rotators and the hip flexors, it isolates certain muscles in the hips and encourages flexibility and decreases rigidity, but isolating these muscles is what makes the pose tough, so if you’re tight in these muscles, you may not be such a fan of pigeon pose (yet).

So, immediately your practice can transform from serenity to impatience in one foul pigeon-chested swoop.

As someone is telling you to “breathe” as you feel like your pelvis is being ripped apart, you’re thinking “I hate this pose. Breathe into it? I’m not in labour, this is not necessary, why am I here…etc”

What’s behind these thoughts?

Well, I used to often feel like this, particularly in pigeon pose, but in various other poses I class too, and I wanted to explore why…

Or is it simply my frustration with the pose, the frustration with the fact that I’m not at the advance stage yet, I haven’t quite found that sweet spot. When I started to let go of that perfectionist in me, and realize that yoga is a slow process, and the reason it is called a “practice” is because we work slowly, and it will take time to reach our goals, I began to let go of that ego, that frustration, the “pain” and “discomfort” subsided, and dare I say it, I actually began to enjoy the pose.

Why was I so down on myself?

There used to be times when I’d think “I can’t do this pose, I’m never going to get it, there’s no point,” and I’d immediately come out of the pose. Not only have I given into my own pessimism, but I’ve given up on the pose.

Ever woken up at 7.30am for your class/practice and thought “I HATE getting up early for yoga,” I think we’ve all had that thought.

But think about it, do you really hate getting up for yoga?

Or do you hate the fact that you feel guilty for not practicing? If you do get up and do a practice or go to a class, how do you feel then? Pretty damn good, I’d imagine. It’s a tough one, particularly if you’re not a morning person, but the whole of your day depends on it, so give it a go.

So, next time you feel negative about your yoga practice, next time you’re thinking “Yeah I went to yoga once, hated it!” don’t just accept those thoughts at face value, have a ponder on why you thought that, and what else might be going on.

Who knows, you might just be missing out on something fabulous.