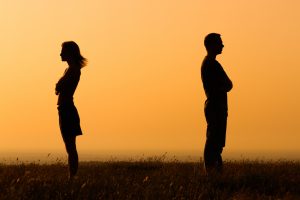 Most often the reason couples don’t seek help with their relationship problems is they are in a co-dependent relationship. That means they are leaning on each other to compensate for unconscious, childhood limiting decisions* that leave them feeling not whole (such as that they are not lovable, not worthy of respect, are powerless, are on their own, can’t support themselves, or are not safe). In other words, they are leaning on their partner to, for example, make them feel lovable, worthy of respect, powerful, or safe by relating to them in certain expected ways or doing particular kinds of behaviors toward them.

Some of the ways of behaving they might expect are, for example, never contradicting them, listening to them without ever interrupting them, supporting them even when they are wrong, buying them whatever they want, always deferring to them, letting them always choose the activities the two of them do, accepting rude behavior, or never excelling beyond their partner.

The couple basically has an unwritten (and unconscious) contract between them to live in this way that makes them feel safe, stable, acceptable, or whatever they need in order to compensate for the limiting decisions* they have. But this only works as long as both of them are willing to stay stuck, or limited, or get by in a meaningless, unsatisfying relationship.

Many people keep themselves stuck in a co-dependent relationship because their focus is on getting what they immediately want rather than evolving themselves forward. They want their partner to make them feel good in the moment, rather than do the work to actually evolve themselves and the relationship forward.

Relationships almost always require one’s own transformation in order for them to work well and achieve really happiness and satisfaction. But many people prefer the stability of knowing what to expect from each other. That’s because they don’t realize limiting decisions* are never true and can be worked through or cleared altogether.

A great relationship of any kind takes committing to one’s own transformation, and moving forward in one’s own evolution, as a higher priority than getting what you immediately desire. Committing oneself to that kind of life requires the recognition that life, in its undistorted form, inherently is designed to work.

Jane Ilene Cohen, Ph.D. is an Intuitive & Transformational NLP Counselor, and an NLP & TimeLine Master Practitioner and Hypnotherapist, with a private counseling practice in San Diego North County (Encinitas). She also works with out-of-town clients (using Zoom or Skype video). For more about Dr. Cohen’s counseling services, go to: JaneCohenCounseling.com. For a free phone consultation to decide if this is right for you, or to make an appointment, call Dr. Cohen at (760) 753-0733.