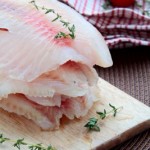 My brother-in-law has been a vegetarian for quite some time, but on occasion would eat some seafood, actually making him a pescetarian.

Things dramatically changed last year when he was given the opportunity to fulfill one of his dreams — to have multiple fish tanks in his home.

After dealing with numerous types of fish, their babies, their deaths, the ordeal of separating this fish from that fish, and observing them for long periods of time, he realized his fish had their own distinct personalities and hierarchies.

You can guess what happened!

He will never eat seafood again!

With everything I’ve been learning about fish and seafood lately this was good timing and is definitely the right choice.

“But I’m eating lower on the food chain, isn’t it healthier?

The oceans unfortunately have become a receptacle for toxic waste, ironically some of it stemming from the runoff produced from raising other animals for food.

“How does this affect my health?”

Toxins accumulate in the fatty tissue of the fish we consume on a daily basis.

Fish, whether from the ocean or fresh water, concentrate toxins and carcinogens in their bodies in much greater concentrations than is found in the water itself.

The mere act of breathing brings in substantial amounts of water full of these toxins, accumulating in their gills and flesh.

A large percentage of fish and seafood are farmed.

So what does this mean for you?

Instead of living the life they were meant to live in the vast open waters they are forced to live in confined, very overcrowded situations, surrounded by their own feces, and being fed food unfit to eat, formulated from animal by-products and fecal matter.

Vast amounts of antibiotics are needed under these conditions and to further exacerbate the problem, this waste and disease enter the ocean, contaminating the wild fish.

“Where will I get my omega-3s? What’s wrong with fish oil?”

Fish oil is pressed out of the same fish we’ve been discussing.

There are many sources of safe, healthy foods to obtain your omega-3 fatty acids from:

Maybe like my brother-in-law, it’s time for you to spare the fish, the ocean, and your health.